Edits since March 30th 2020 are in this color. I noticed a room full of people  transfixed on a man who pulled out trick after trick. “Think of a number between 1 and 5”, he said and he guessed it right. The young lady had thought of 3. And then he asked another man in END_OF_DOCUMENT_TOKEN_TO_BE_REPLACED

This is the story of a young girl who had been diagnosed with schizophrenia and how what her mother said in the first minute has changed her life completely. This was a regular day back in 2012, when I was in office doing consultations. I love doing consultations because it is so much fun to END_OF_DOCUMENT_TOKEN_TO_BE_REPLACED

So, it has been three years since we have started School of Excellence. And retrospecting the past few years, I have learnt a few things. And in this article I am going to share what I discovered. As I remember three years ago, my ‘tech’ network told me, “You are a born genius with programming. Don’t END_OF_DOCUMENT_TOKEN_TO_BE_REPLACED

Note: There is an audio recording in the middle of the post. On 2nd December, I wrote in my previous article about helping 300 children from 3 different schools from 9th to 13th. And in this article I would like to share the experience I had working with them. What happened? The children surprised me. They END_OF_DOCUMENT_TOKEN_TO_BE_REPLACED

What happens if we take the technology from uP! with NLP and make that excellence available to school children? This December we are working with 300 school children doing, conversational programming in a group as well as one on one. If you are trained on uP! with NLP, please do volunteer. We have picked 3 END_OF_DOCUMENT_TOKEN_TO_BE_REPLACED

An employee wants to quit. The HR convinces him to stay back. He agrees to her, fully meaning it. And he puts down his papers after 2 days. A lady is super excited about a product. The sales person is very convinced she is going to buy the product. And so is she. The next END_OF_DOCUMENT_TOKEN_TO_BE_REPLACED

Note: There is an audio recording in the middle of the post.

On 2nd December, I wrote in my previous article about helping 300 children from 3 different schools from 9th to 13th. And in this article I would like to share the experience I had working with them.

The children surprised me. They did QC on our work. They referred their friends and brought them over and ensured we did our magic on their friends as well. I was surprised. I was told these are the naughtiest kids in the group. And here they were, wanting to be ‘programmed’ to learn and study well.

On Day 1, we were about 8 of us. We went to the school, and the teachers got the students assembled and left. We were there and the children were there too. They began to play with one another. I realized very soon that no one was going to come and introduce themselves to us or set any expectation, and it was up to us what came as an outcome of everything that happened. So, I stepped in and said ‘Hi’ to the students and shared with them 3 stories. In a room filled with 100+ so-called ‘naughty kids’, I had to first earn my attention. I spoke in broken grammar, laughed with them, did whatever I did to feel and become a part of them. And as soon as I had their full attention, I quickly narrated 3 stories, all revolving around the importance of making a good decision in their life and emphasizing the importance of this moment.

When I was finished, I got them into groups with the volunteers with the expectation that they are going to work one on one with the students. Soon, I found myself pulled into action when I had to demonstrate to a couple of team members how to work with a child and get the others to watch. This was important part of the design because the children learn (unconsciously) by watching the child being worked on as well. And before I could realize what was happening with those children, I saw a a group of students bringing their friends and insisting that I work on them as well. It was a lot of fun. We wanted to do the peak performance game from new code for the next day, so we cycled between swish, collapse anchors and reframing depending on our intuition of what will work best for each child.

When I wanted to do reframing with a student, the induction was 15 seconds; it went like, ‘look into my eyes …’. And the involuntary responses followed even faster. Thankfully, they were twitches; otherwise at that speed, we could have suspected them to be voluntary movements.

The next day, Harini led the show. She did ‘collapse anchoring’ on a group of students . An induction with future pacing and a patterning called ‘the path to success’. Of course, both of us used every opportunity to also build a strong character in them to the best of the available opportunity.

We repeated this in the second school. We were welcomed very warmly there. Thankfully, we had a good introduction and I didn’t have to work hard to earn the attention of the children. Things progressed pretty well. And the teachers joined the loop. We ended up helping the school teachers with personal changes that will help them perform better with the children.

We had many interesting things going on, but here are some of the few things I remember from the students I worked with personally:

1. TV sound: A student said he heard TV sound whenever he opened the book and this distracted him and he wanted to see the TV. We helped him get rid of this sound completely.

2. Similar to above, some students saw the football and cricket ground. We programmed their mind to automatically see who they are and how happy they will be 20 years from then on in the profession they choose.

3. A couple of students demonstrated disgust and hate towards studies. It was an automatic response. They didn’t want to feel that way but they did. I remember one student having the nostril flare and a sideway twitch above his lips every time we spoke of a specific subject. As expected, we programmed a new emotion towards these subjects for them. I implanted in their minds the feeling they had when they were playing, having fun and joking around and attached the same feeling to those subjects. As a result, one of these guys impressed me by bringing his book from downstairs, sitting in a chair and reading it without any distraction for the next two hours

4. A student had memories of a fire accident, that had been distracting him for long. We helped him forget the intensity of that moment, so that when he looked back, it appeared like a movie to him.

5. We also helped a couple of children to get rid of memories from a bad relationship.

So, the outcome in the end was that the children had a very clear answer to the question, ‘What do you want?’ and had overcome whatever was stopping them from moving in that direction. They had learned new ways of thinking, feeling and seeing the world that will help them accomplish whatever they want. And in addition to that, we programmed them using the new code games for peak performance in whatever they study, so that with the least impact they have the best output.

What I am curious to see is what will be the outcome of all of this on the other children we did not work on. Will they unconsciously model the new behavior of these students?

Audio recording from the event:

Following is a recording of my conversation with the 100+ children. A lot of people told me it doesn’t sound like me. And I am glad that I am flexible to allow myself sound ‘different’. I can clearly imagine the failure it would have been, if I had gone into the floor with what people consider a hypnotic voice or the other extreme of a high-energy voice. I had to be with the children, use the modulation that matched their current rhythm then, and had to build unconscious rapport and then lead them to the required ‘trance’ state.

What I learned from that event?

1. Children, however naughty they are labelled as, have more desire, congruence and will than adults. If you can convince their unconscious what you are doing is important, you will get their full attention. It is all about framing.

2. Two of my most favorite tools for programming are ‘Metaphors’ and ‘Modelling’. From whatever I could observe, the children demonstrated to me that the effectiveness of these tools are even more powerful for them.

3. Access to states: In my workshop, I tell my participants how I am always in the hunt for excellent states of mind. And how there are thousands of them, each suitable for different situations. If you are on the hunt as well, you may find some amazing states to learn from the children. I use the full power of Neuro-linguistic Programming to ensure I carry those states with me in a way I can access it on demand when I want.

4. There are certain things that don’t have to be taught, like a scary face scares children across most cultures, and a ‘peek-a-boo’ gets children curious in most cultures. These responses seem to be built in! Setting up a formal class of communication with the unconscious processes using involuntary signals seem to fall into the same category as well.

What the media has to say?

Following are some extracts from the media:

A note to all the volunteers

These are the people who chose to use their skills, training and superior capabilities of observation and programming for the benefit of children to help creating generations of excellence. Harini and I like to thank them here and convey my sincere appreciation for their contribution.

Also my regards and thanks to Mr. Vijaydeep who made it happen by taking all the efforts to make this happen.

When we were on the field, the photographer (uPwithNLP-trained) quickly took the opportunity to give a helping hand in working with the additional children who joined us. And due to this we don’t have a photo of all the volunteers. Nevertheless, following are some pictures from the event. 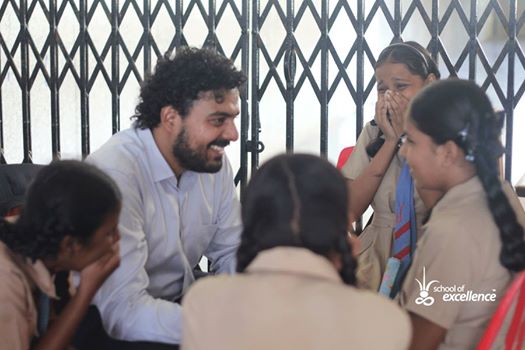